The 5 main squares of Turin

Piazza San Carlo, affectionately known as the lounge of Turin, is the heart of the city for locals. This majestic square, designed in Baroque style, was built in 17th century. Throughout history, it has beencalled the Piazza Reale (Royal Square), Piazza d’Armi, and during the Napoleonic era, Place Napoleon. From 1618, it has been dedicated to San Carlo Borromeo, one of the twin churches (together with Santa Cristina) that sits at the southern edge of the square.

The Caval ‘d brons (Bronze Horse), the equestrian statue of Emmanuel Philibert, adorns the centre of the square. Together with the Mole Antonelliana and the Basilica of Superga, this statue is one of the symbols of the city. The monument depicts the Duke in the act of putting away his sword after the victorious battle of S. Quintino in 1557, which resulted in the restitution of its domains to the ruling house. The armor the dukewears is the perfect reproduction of the original one, which can be admired in the Royal Armory of Turin. The work is the masterpiece of the sculptor Marochetti – it was casted in Paris in 1838 and exhibited at the Louvre Museum before being transported to Turin.

Piazza San Carlo is considered one of the most beautiful squares in Europe, surrounded by elegant porticos designed by Carlo di Castellamonte in the 17th century. The arcades of Piazza San Carlo also host the most ancient cafés of the city, such as Caffé Torino and Caffé San Carlo. Located under the western arcades, in front of the entrance to the Caffè Torino, there is a plaque of a rampant brass bull, the symbol of Turin, set in the pavement since 1930. Tradition has it that stepping on its‘attributes’ brings luck – and one can observe with amusement a hollow wear of several centimeters on that fateful spot. It was only in 2004 that the square was transformed into a pedestrian zone, and today, it is a joy to stroll the square while admiring the beautiful surrounding monuments. 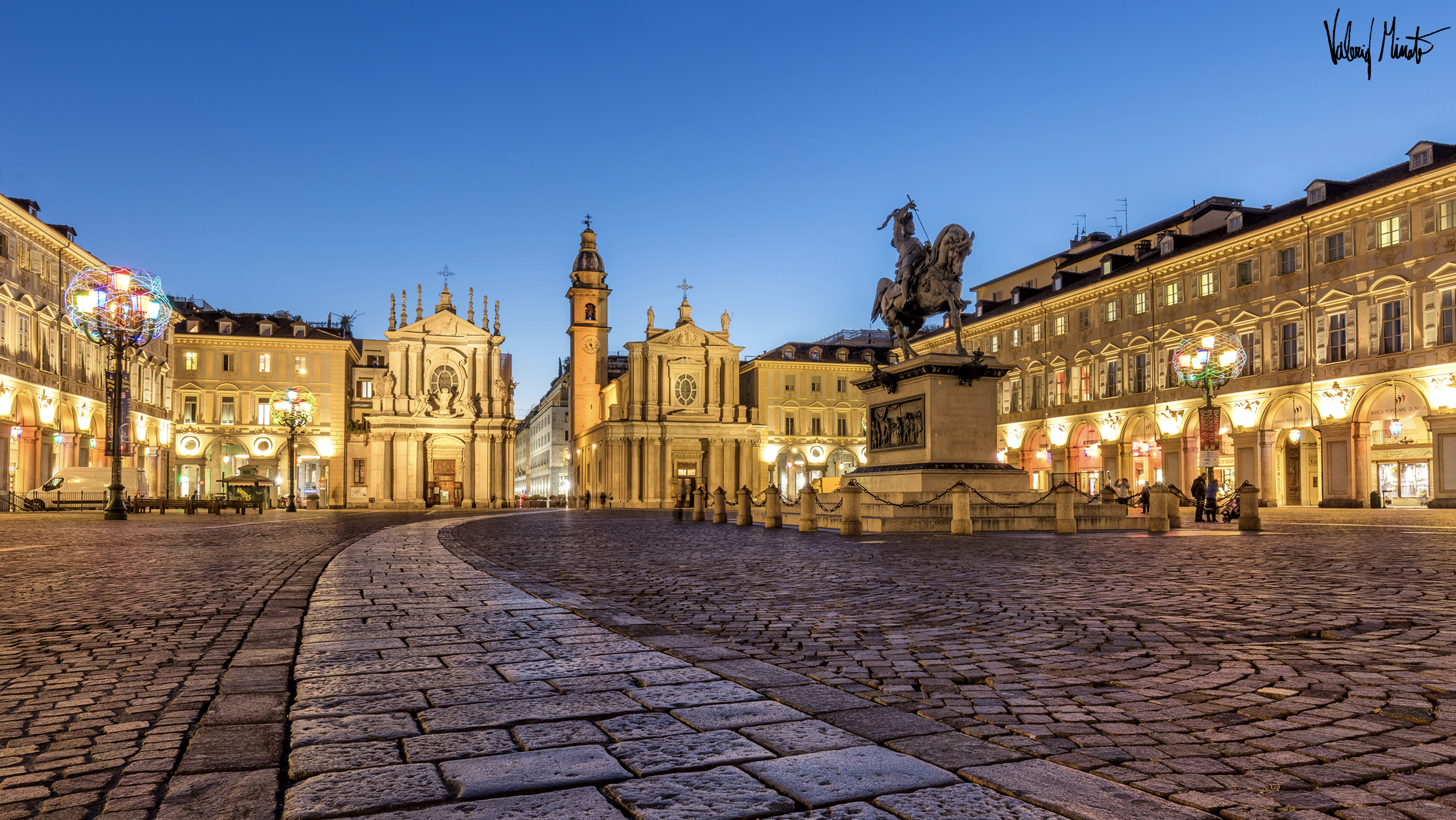 Piazza Castello is a large rectangular esplanade considered to be the true centre of Turin. The half-pedestrianized square hosts some significant buildings such as Palazzo Reale (the former Savoy Royal House), the Palazzo Madama (which previously hosted the Savoy senate and, for few years, the Italian senateafter the unification), the formerly-Baroque Teatro Regio di Torino (rebuilt in modern style in the 1960s, after being destroyed by fire), the Royal Library of Turin which hosts the Leonardo da Vinci self-portrait, and the baroque Royal Church of San Lorenzo. Piazza Castello also hosts a Fascist era building, the Torre Littoria, a ‘skyscraper’ which was supposed to become the headquarters of the Fascist party, although it never came to be. The square regularly hosts the main open space events of the city, including live concerts. The 4 main roads of Turin branch off from Piazza Castello: Via Po, Via Pietro Micca, Via Roma, and Via Garibaldi. 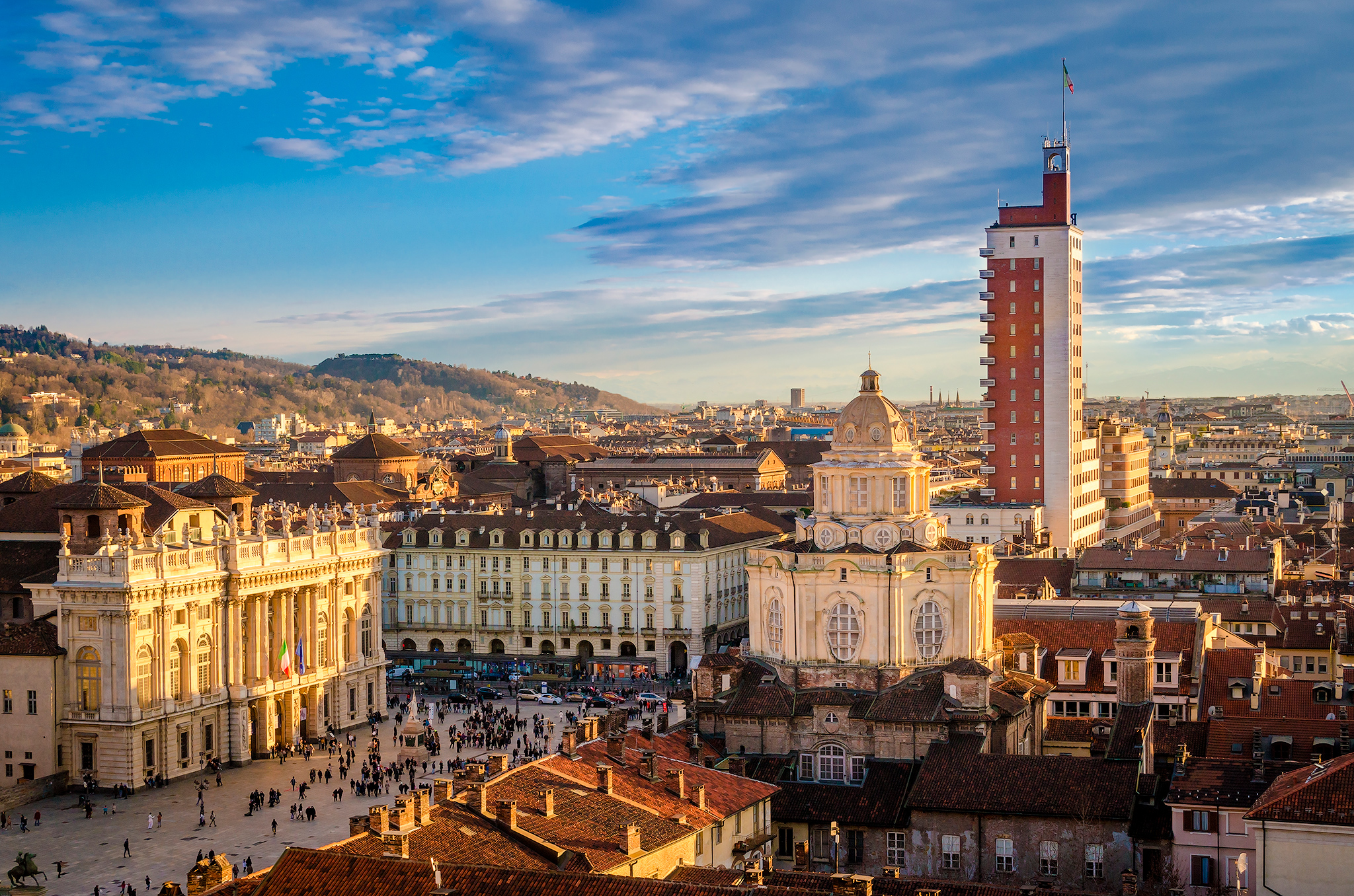 Piazza Vittorio Veneto, also known as Piazza Vittorio, is not just the largest square in Turin – at 39,960 square meters (360 meters long and 111 meters in maximum width) in size, it’s the largest in Europe amongthose entirely surrounded by arcades. Piazza Vittorio takes its name from the Battle of Vittorio Veneto in 1918, featuring the historic Vittorio Emanuele I bridge at the end that connects the square itself to the twolateral river-sides – as well as the Murazzi del Po, on the right bank of the river, and Borgo Po, across the river, where the Church of the Gran Madre, Monte dei Cappuccini, and access roads to the eastern and hillypart of the city are clearly visible. The particularity of this square is that the ground is not level; it flows down towards the river, and from the entrance of Via Po to the Po River, there’s a difference in height of about 7 metres. Every evening, the restaurants and cafès around the square will set their tables in the outdoor spaces, which comes to life. The square is lit by empire street lamps with cornucopia arms, introduced in the 1960s. The visual impact of Piazza Vittorio Veneto is truly breathtaking. 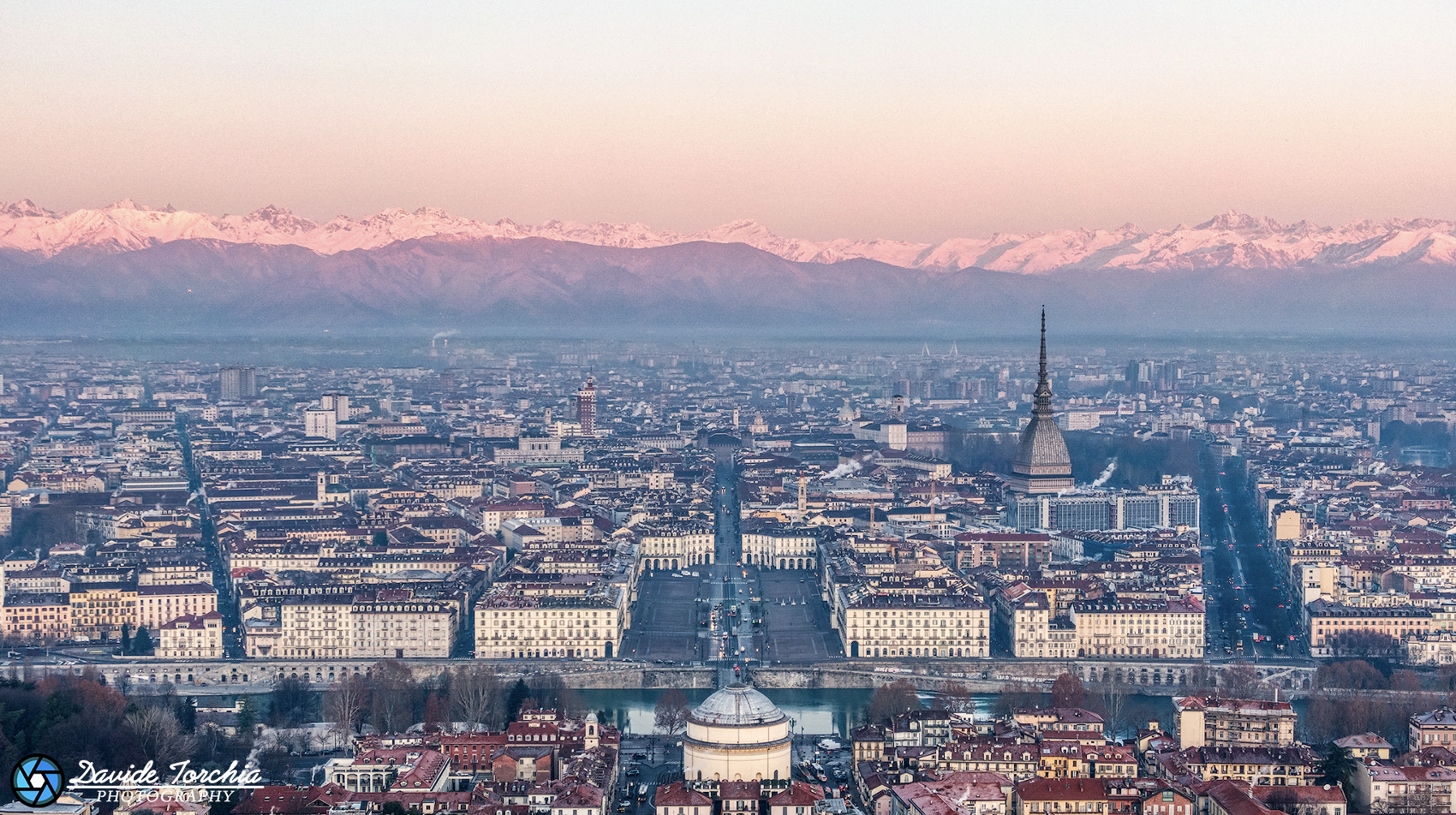 Piazza Carignano is one of the most beautiful spots of Turin and a major symbol of the ItalianRisorgimento. It is surrounded by buildings with Baroque architecture: on one side there is Teatro Carignano (1783), flanked by the historic Ristorante del Cambio and Gelateria Pepino. On the opposite side, Palazzo Carignano. The uniquely-curved façade of Palazzo Carignano, on the back of which is another historic  location, Piazza Carlo Alberto, and the Egyptian Museum just a few steps away, make this square one of  the richest in artistic, historical, and monumental places in the historic centre of Turin. For many, this piazza remains the one that you cross by force of attraction if you have to go from north to south, or from east to west. 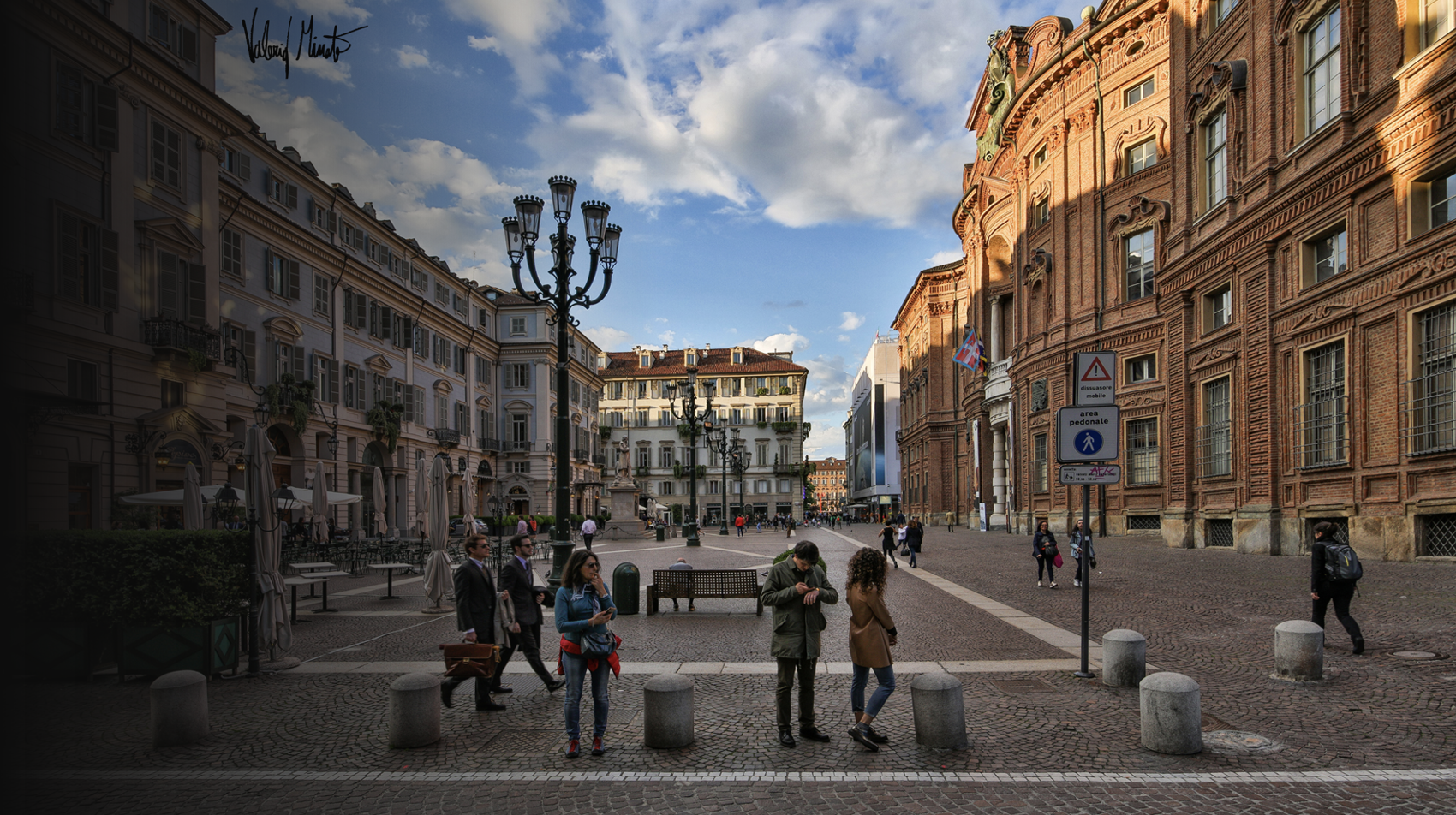 Arguably Turin’s most elegant piazza, Piazza Carlo Alberto is completely pedestrianised and fringed by perfect examples of the city’s world-class Baroque architecture. At its heart stands a huge and impressive equestrian statue dedicated to Carlo Alberto of Savoy, King of Sardinia, immortalised in military attire and triumphantly holding aloft a sword. Produced by Carlo Marochetti and inaugurated in 1861, the statue proudly faces Palazzo Carignano. 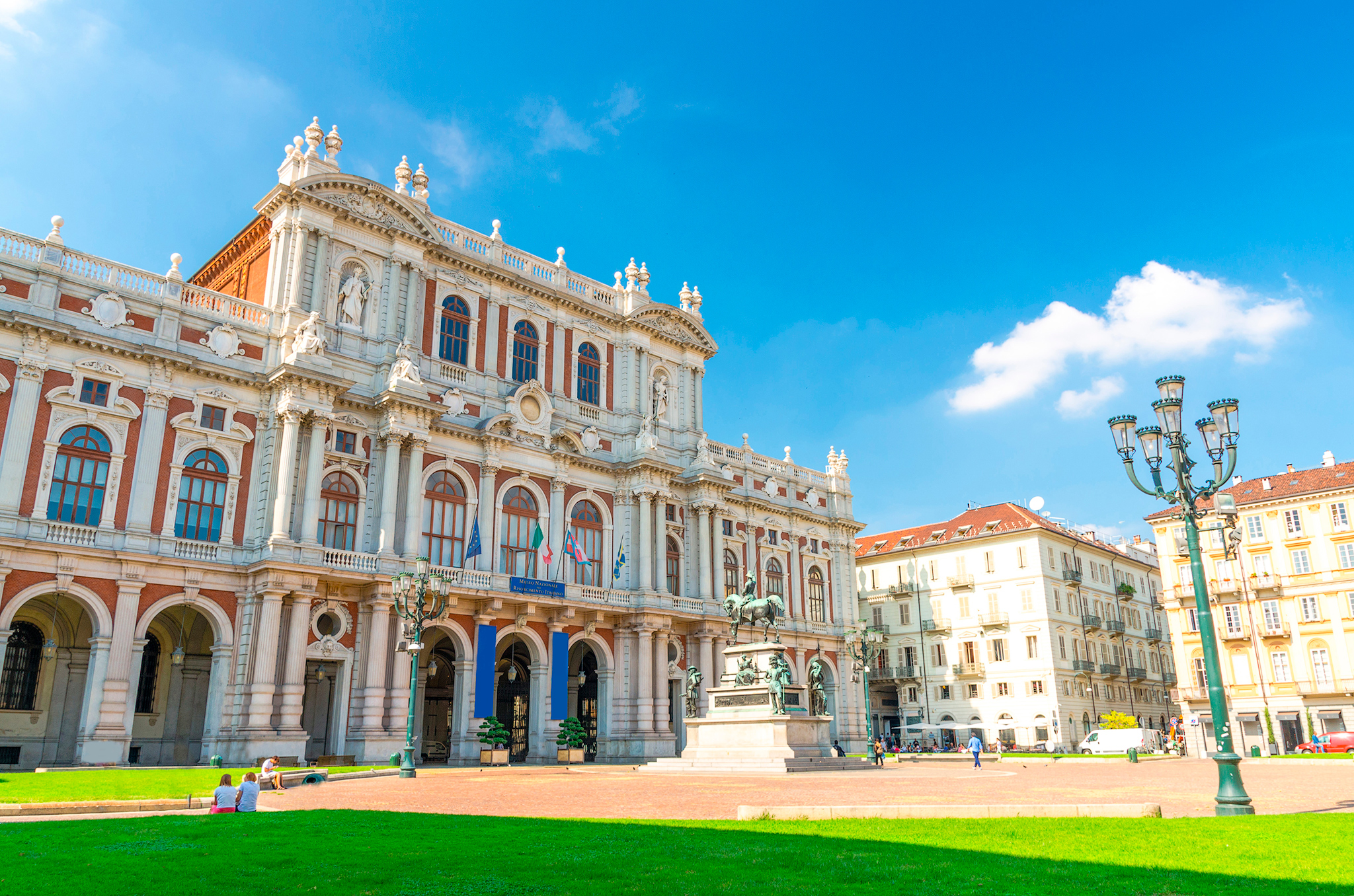